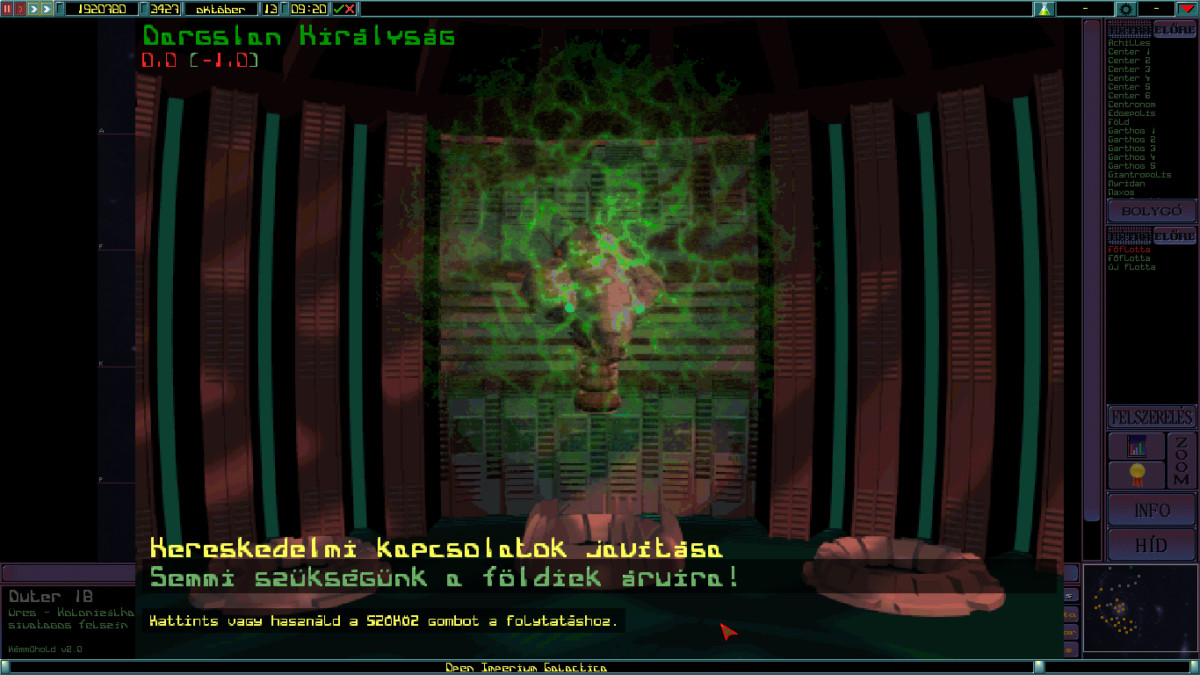 What a scam that the Dargslan occupies a planet from the enemy with all its cannons left on it! Their fleet has left the planet, it will take approx. It has 6 time units and 5 cannons, and planetary shield 2.0 on it as I attacked. That’s a joke.

I would also like to know how Dargslan starts the game. I’ve taken off at least 20-21 of their entire fleet – which is at least 63 battleships, more than 500 destroyers, and more than 1,400 hunters plus equipment for these – but they still come with 28 giant spaceships and 70-80 hunters. Although it will take them a little longer for the fleet to start. You have to start with 1 giant spaceship (battleship) and in space, right in the middle of nowhere, without touching a military spaceport, your fleet will somehow be complete. How can this be?

I don’t think you can build a fire station, a park, a bar, an entertainment center or a bank on a planet inhabited by strangers either? It’s only in human colonies not On a planet inhabited by aliens I only have a police, a commercial center, which is useful and that’s it. Those certain extra buildings are only for people. If we might want to deal with them, try to focus on colonization at the beginning of the last phase, even if we lose the planets, there will still be a lot of “humans” in the galaxy.

The Dargslan scam above is completely real. He also has a regular fleet — which he builds — but he also always has a full fleet that, if you kill him, is immediately re-created on one of his planets. This is no longer always the case in your planet defense, not all of your planets will have maximum protection. Damn you know what the scheme is. In addition, you can cheat with someone else that you can turn to for your own benefit. He has no construction limit on the surface, you may have a small planet surface on which to build. He builds any number of buildings there regardless. In retrospect, you won a pretty good planet. It is also 100% that he is not +50/60/70 people, which increases the population, but much more. These are the things that make the game harder.

I’ve tried to win so that every other species can survive (obviously without the garthogs), but that hasn’t worked so far. Merchants are almost impossible to save, they start with few planets, are terribly clumsy and are even right in the middle. What’s even more interesting is that quite often the dribes are wiped out by the Dargslan fleet first, even though it says they are allies.

What I’m sorry about in the game is that diplomacy makes almost no sense: 99% that you can only get an ally if you’ve been almost completely exterminated; or you are very strong. It is almost impossible to create a strong alliance. Let’s say we’ve already managed to form an alliance with the Dargslan, but the game is pretty stalled because the cheating fleet immediately started occupying a planet. When I stood there with my own fleet, he did not attack them, but he circled past the planet.

I would be happy if this particular ever-re-emerging entire fleet could be turned off somehow, they would still be strong enough. Obviously the game would be very simple, but I would still try the thing. I’ve read that someone else uses the jerking method against the entire fleet of Dargslan: he builds 5 meson cannons on one planet and a planetary shield 2. He sends up 1 hunter and then when the entire fleet comes close to the planet, he attacks with the hunter. The 5 cannons will also appear on the space combat screen and a bloody massacre will end. Of course, you need a little refill in front of it to get the dargslan in the right direction.

One thought on “IG1: interspecies imbalance and injustice – Liar”