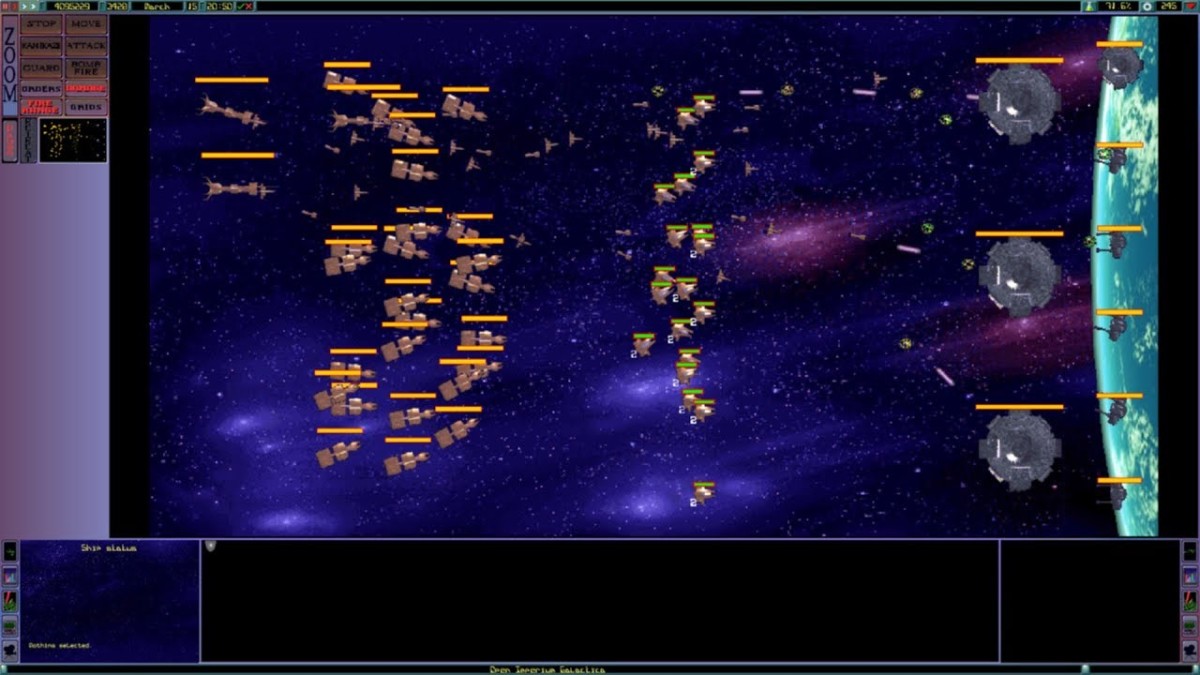 Time can be spent on the first two levels, which will help you make the final victory by joining the Thorin flagship on the first level once the fleet has arrived.

At level 2, report only the 2nd virus infection to the colonel and attack the Destroyer 2 ship only at planet Achilles, or just after it has left. In both cases, if you can poke it, but if it doesn’t work right away: game over. 🙂 Another relief: if you have a hard time defeating the Garthog fleet (in the original game it is enough to destroy Destroyer 2, in Open-IG1 you have to destroy the fleet), build 5 ion guns on the Achilles and attack them next to the Achilles. 5 ion guns smoothly remove most ships.

At level 3, you can develop and manufacture before the last Garthog planet is occupied, and you can even occupy a few planets. I’ll talk about that later.

At level 4, stop at 24 planets because the endgame will start if you have your 25th planet either from reservation or colonization. For 24 planets, develop everything you know and only afterwards.

It greatly speeds up the end game if you take advantage of the game bug. Guns are inversely damaged in space and on Earth. This is how to level 3 the mesh gun from Ychom. Attack Planet Center, which has a meson gun. Rocket damage to each gun and retreat. You can even trace the planet with a spy satellite with 2% damage in space = 98% on the planet. If you attack again, you will enter the ground fight. You may not go right away, you need a few seizures, but you can book the planet. The point is, don’t accidentally fire the mesh gun. Once booked, it can be built elsewhere. If you are good, you can reach down to the barracks. In 90% of injuries you will surrender, who will write that he has capitulated. Be sure to stop firing immediately to prevent it from being fired, so it will.

Dargslan attack with Battleship 3, each space base can be fired out of range. You have to poke it, but it will work: your battleship is about to reach and can shoot the space base, it can’t shoot back. After firing space bases, shoot missiles at each shield and cannon, then retreat. You save and attack. If you enter the ground battle, you go! There are plenty of 5 Meson Rifles and 1 Planet Shield on each planet for defense. The shield is good for first firing at it, tying the units. Shoot hunters only when there is no one else. If you bring a ship, you fire it with all the guns, and if a battleship comes, you first. This is often the case with a Dargslan fleet.

Especially in the middle of the game, but also in the end game, keeping your tanks in the interplanetary warehouse and always putting them on the planet you are attacking is useful. At level 3, the Garthog always invades another planet, and you can call them all the way. Then you find out which one, but sometimes you change your mind. You have to pay attention to where the fleet is going and always place tanks on the planet where you are going. If you shatter the mesh gun and build 5 on each planet, you have no chance. In this case, the tank does not need protection.

2 thoughts on “Comprehensive strategy for IG1 by Adani12345”